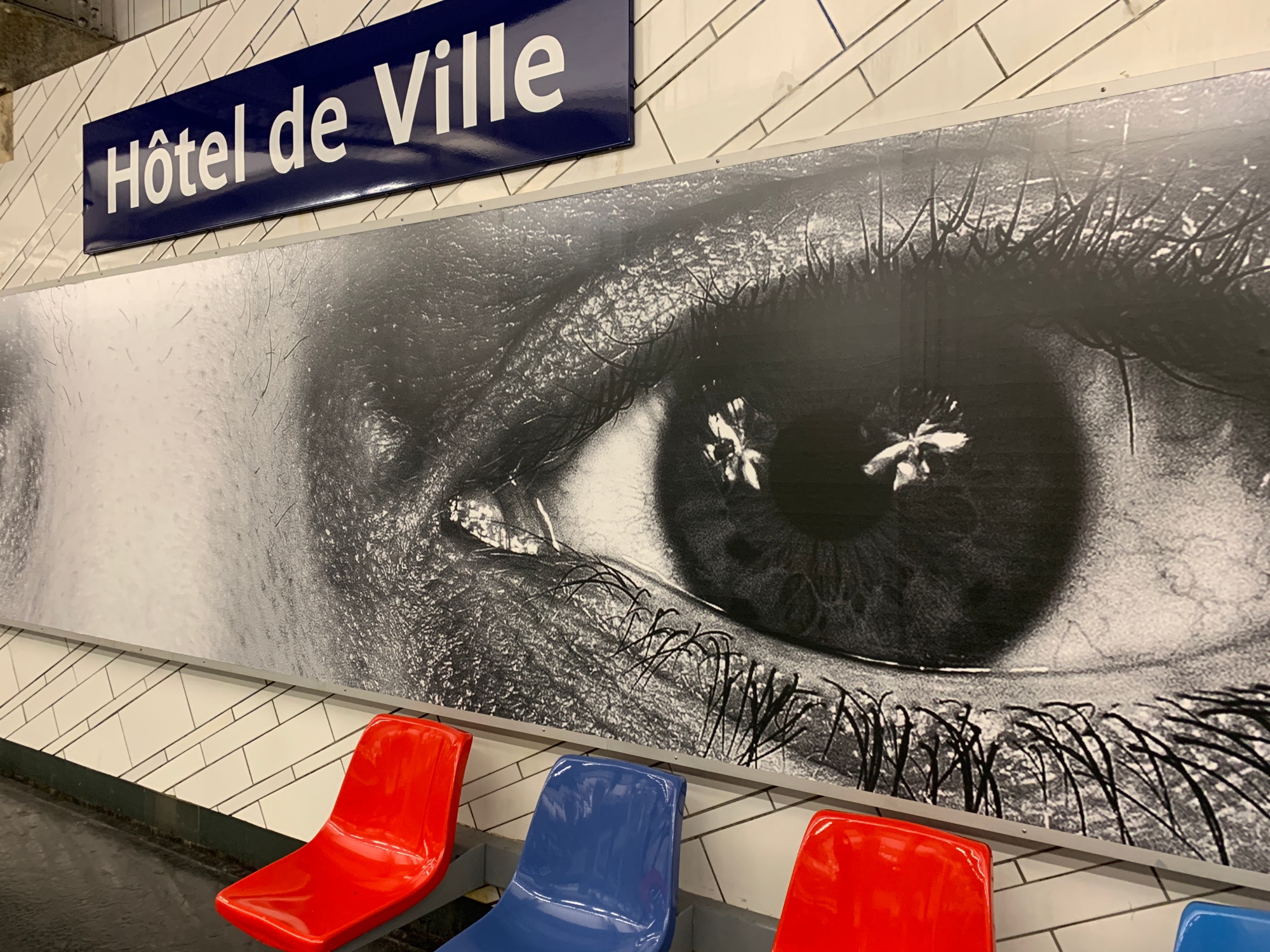 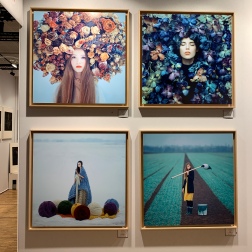 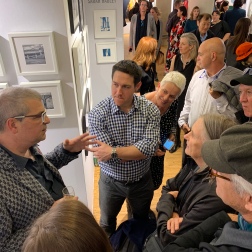 The focus on women’s contributions to photography initiated at Paris Photo were amplified by citywide arts institutions. Two significant photo events, Fotofever and Photo Saint Germain, run concurrently and spotlighted women by providing platforms to further discuss ways to address gender parity. Fotofever dedicated to the discovery and collecting of contemporary photography presented photographers from 20 countries. Photo Independent from Los Angeles hosted over 20 such photographers including Sarah Hadley and Renée Jacobs.  There, we were introduced to the organization Photos De Femmes founded by Jacobs and her wife, Wendy Hicks, which is committed to educational programming and exhibition opportunities to “elevate the way women are seen”. Fotofever in collaboration with Recurrence Photo created a special project section celebrating a segment of women photographers rarely selected to showcase, those over 40 years of age, entitled, 40 and Over. 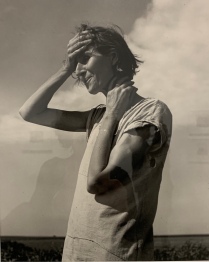 Jeu de Paume hosts two erudite exhibitions of women who altered the social and cultural landscape of their time. Dorothea Lange: Politics of Seeing displays her fierce conviction to create and report authentic connection with her subjects. Her documentation formed an oral history, which together with her published images, changed public opinion and policy on issues regarding migration, industrialization and internment. Her consistent focus became the revelation and denouncement of injustice. Her imagery is majestic and her empathy palpable. Ana Mendieta: Covered in Time and History is the result of a three year research collaboration and is the first exhibition devoted to her moving images. Sent away from her birthplace, Cuba, in 1961, at the age of 12, Mendieta went on to create 104 films between 1971-1981. Twenty of these are presented which wrestle with her central themes of memory, history, ritual, body, identity and gender. Her visceral exploration she wrought using earth, fire, water and blood. Included are her drawings, installations, performances, photographs and sculptures. No photos were allowed within this powerful exhibition. 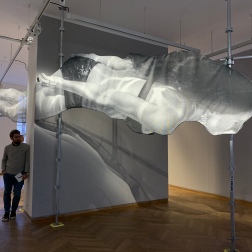 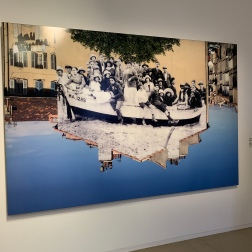 Who knew it all started with a found Samsung camera in a Metro station? Momentum, the exhibition hosted by the Maison Europeenne de La Photographie (MEP)  chronicles the dynamic forces the performer, filmmaker, and image-based artist JR employs to reveal, repackage and reassert our collective responsibility for each one another. JR came to prominence a dozen years ago with his illegal display, Portrait of a Generation, his graffiti-style street photography which he anonymously plastered on Paris buildings and Metro stations. Now a highly regarded international art star this exhibit reveals how his outsized imagination fuels his mega-scaled international projects. Systematically and collaboratively he breaks all bounds on what can be done with a portrait. His Inside Out participatory website has engaged over 300,000 people from 120 countries. Experiencing his black and white augmented reality composition, Guns in America, awash against a 40 foot black wall in a a dark exhibition room left me in awe. For this collaboration with TIME magazine he photographed and recorded over 230 people responding to the increase of gun violence. This interactive video mural, Chronicles of Gun Violence in America, is touring the U.S. Find details here.

The Foundation Henri Cartier-Bresson celebrated it’s new location in a comprehensive retrospective dedicated to Belgian photographer, Martine Franck. Multilingual, trained in art history, and a co-creator of the photo agency Vu, she was also married to Cartier-Bresson. A  founder and manager of the family foundation, she began planning this exhibition in 2011 with curator, Agnès Sire. Punctuated by her quotes on life and photography this lyrical exhibit displays her tender and joyful engagement with life. She shares a fascination with people, our landscapes and our lifestyles. “It’s a drop in the ocean, but I believe in it. To be a photographer, you need a good eye, a sense of composition, compassion, and a sense of engagement.” Franck responded to the beauty and strength of the human spirit. She was socially engaged and used her images to express her profound empathy.

This year marked my first experience at AKAA, the Also Known As Africa art and design fair held in the Carreau du Temple in the Marais. This vibrant modest-sized art fair hosts painters, photographers and sculptors from a multitude of galleries from African nations. Director, Victoria Mann, states their inspiration and mission; “Let’s rethink the map of the world and place Africa in its center. Then take a pencil and draw routes, across the continent, seas and oceans, to other territories. These routes are taken by people who carry with them their ideas, their beliefs, their know-how and imagination. For humans never cease to travel and explore unknown circles, aspiring toward new encounters. From these encounters spring new ideas, and because these reciprocal influences cross borders, a territory like Africa cannot be considered as a closed continent.”

I was fortunate to attend the evening program, The Sound of Four: Voice of the New African Photographer, featuring Dakar and Brooklyn-based photographer, Laylah Amatullah Barrayan; South African Art Consultant, Makgati Molebatsi: Gabonese multimedia artist, Owanto, and moderator, Publisher of Something We Africans Got, Anna-Alix Koffi. I was introduced to their dynamic engagement fueling cross-cultural collaborations, each focused on raising awareness through the arts. Barrayan, co-founder with Adama Delphine Fawundu of MFON: Women Photographers of the African Diaspora, spoke recently at the Tate Modern Museum and they have a new project with World Press Photo. Owanto shared her Flowers project, a multimedia photo-based campaign dealing with female mutilation. Her international initiative works to eradicate this practice still active in 30 countries. Her work erases the myth holding this practice as a rural, tribal event but educates us of its current presence in American urban populations. Her formative images reimagine the narrative utilizing found archival photos of women and overlaying vibrant floral blossoms, an homage to the artists own evolution, of seeing these affected woman not as victims, but heroines.

Book Fairs abound on the left bank during Paris Photo including Offprint and Polycopies. The famed bookstore Shakespeare and Co hosted the latest project of 10 x 10 Photobooks, How We See: Photobooks By Women. Had I not been previously scheduled to attend the Amsterdam-based FOAM panel on the Future Of Photography, I would have been in the front row of a discussion on this project with Russell Lederman, Iona Fergusson and moderated by Federica Chiocchetti. I did peruse their reading room which presented a global range of one hundred 21st century photobooks by women photographers. Historical records detail women’s contributions to this art form beginning with Anna Atkins in the mid 19th century. However women selected for top prizes, publishers inventories and/or promotions are small in comparison with male peers. To quote from the #LaPartDesFemmes manifesto for equal opportunity in photo;  “Look at us. Take your time. Listen to us. It’s time.”